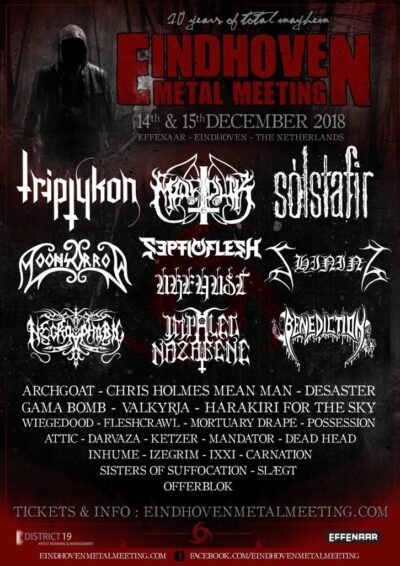 The sold out Eindhoven Metal Meeting, concluded its 10th year of total mayhem in Eindhoven, NL at Effenaar the weekend of December 15-16, 2018. It’s the longest running indoor extreme metal fest in Nederlands and I have to say I am impressed with how Europeans keep the festival spirit alive even in winter. Not that winter in Nederlands is comparable to the piles of snow back in Canada.

Overall, EMM was a great experience, unfortunately I can’t yet be two places at once, so I didn’t get to see all the bands, but the ones I did catch were all tight and performed well.

The first band I checked out on Friday was Sisters of Suffocation (NL); I walked in and they were already playing and the guttural vocals hit me like a wall of bricks. They played on the main stage and were definitely one of the top bands that made use of the stage size and showed true command over the crowd. While they are more generic death metal, it was heavy, loud and the perfect way to kick off the evening. Even through the issues with the mix and the bassist’s mic not being on, it’s a band I would recommend checking out.

IXXI (SE) came onto the lower stage completely filthy and their disheveled appearance matched their brutal set. Disgusting black metal from Sweden, this was one of my most hyped bands and they completely lived up to my expectations. Depravity continued with Weidgedood (BE) playing a particularly malicious set convoking despair and angst and making the best use of the lighting on the smaller stage. Another band I have been following for years, I was quite impressed with both the show and the reaction from the crowd.

Around 21:00 the issues with the crowd control at the smaller stage became an issue. The single entryway funneled into the merch area and everything halted to a standstill as people were trying to move into the stage area, out of the stage area, line up to buy merch and generally move around. It took a full 15 minutes to move from the downstairs stage to the main stage, which left hardly enough time to grab a beer (<5€) and get in a prime spot for the next band. Whether it was this issue or other reasons, the promoter announced that for 2019, there would be less tickets sold.

Double fisting cheap beer at this point was the best way to see blackened pagan metal legends Moonsorrow (FI) rip through their set. Having seen them in the past, they continue to deliver an excellent performance even with the technical difficulties and treated the EMM to a brand new song (see video). The somber and exhilarating ritual performed by Urfaust (NL) was a bleak lo fi spectacle, and I was glad I managed to shove myself through the crowd to witness part of it as I had to fight my way to see the band that cinched my decision to go to this fest. Sólstafir (IS). The most bizarre act to come out of the country since Björk, they are a hard to describe whirlwind of heavy post-rock with distinguishable vocals that took the crowd by storm. As their lyrics are all in Icelandic, I couldn’t understand what they were saying, but the emotion supersedes the language barrier. The heartfelt introduction to Bláfjall (Black Mountain) hit me like a ton of bricks and after their set I was done for the night

(Harakiri For The Sky – Jacobo Winterdal)

Saturday was a bit of a late start, the first band I caught was Harakiri For The Sky (AT), stunning, fast and moody. Necrophobic (SE) was what put this fest on my radar and I’m glad they did. Having never seen them before, but a huge fan since their debut album, they blew my mind with how tight and sadistic their performance was. Shining (SE) followed and proceeded to decimate the crowd with a no gimmick set.

The only mosh pit I saw the entire time I was there was for Impaled Nazarene (FI). Playing on the smaller stage, it was packed to the tits and the energy in the room was immense. As a special Suomi Finland Perkele set it was the most aggressive and violent hour of the weekend.

Never really been a big fan of Triptykon (CH), but they did an excellent job showcasing their brand of gothic metal that was well received by the crowd and entertaining to watch.

Overall the festival was amazing with great people and great music set in the lovely town of Eindhoven which is small enough to easily navigate. The selection of underground to more well known extreme bands was balanced and the ticket price was quite reasonable, a solid contender for the annual rotation.

Thank you Jacobo Winterdal from Metal Messiah Radio for letting me include your videos. 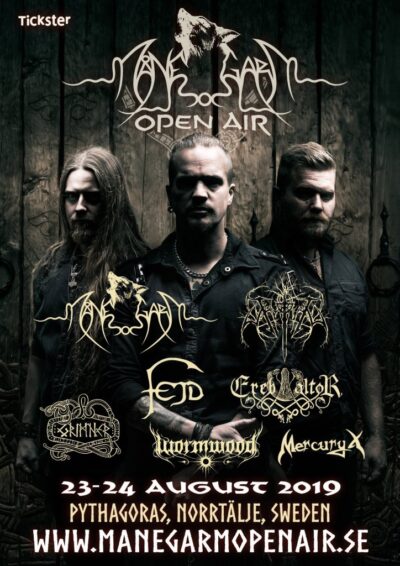 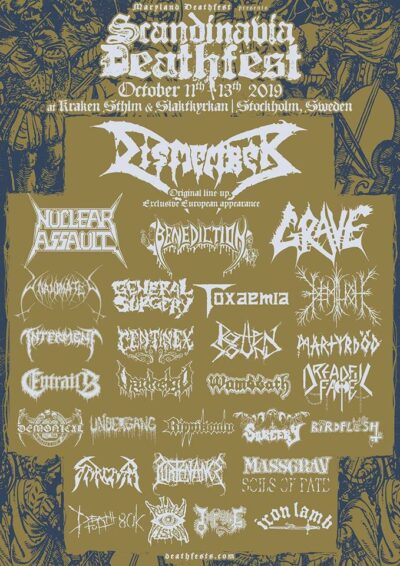